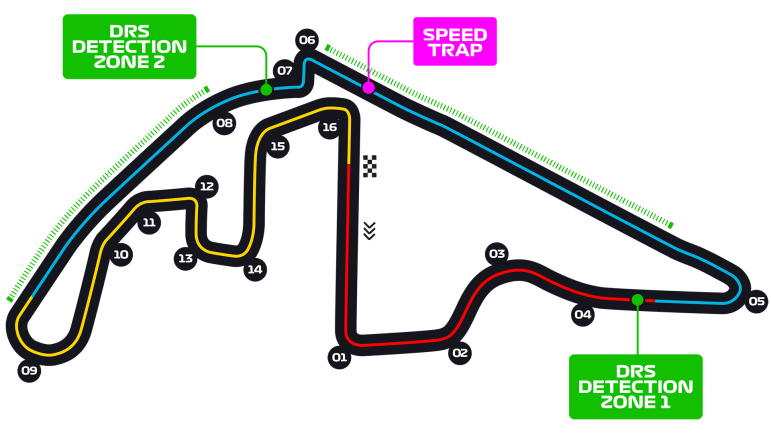 Lewis Hamilton looked unbeatable in today’s qualifying session. How was he able to look so dominant? Let’s take a look at the numbers.

Sky commentators were talking about Ferrari losing that straight-line speed after the inquiry into the engine done by Mercedes and Red Bull. I disagree with their assessment. Ferrari was nowhere Mercedes today, but it wasn’t because of the straight-line speed. Both Charles Leclerc and Sebastian Vettel were the fastest coming out of the last corner, and the fastest at the speed trap.

Take a look at the difference between Vettel and Valtteri Bottas at the speed trap. An incredible difference of 5 km/h. Why was Ferrari so “slow” at the end of the lap then?

To begin, let’s remember that the intermediate speeds are measured at the end of sectors 1 and to respectively.

Ferrari was once against among the fastest in this chart. The Scuderia showed that they excel in short acceelerating sections, and they were the fastest at the intermediate 1 speed trap.

Interestingly, Sebastian wasn’t the fastest at the end of the second sector. Why would that be? I mean, the end of the second sector is a long straight, so, Ferrari should be fast there right? Yes, but the fact that they aren’t so dominant here makes me believe that this is related to the battery and its energy deployment. It seems like Ferrari is deploying most of the harvested energy during the first DRS section, making them the fastest at the speed trap. For the second DRS section, however, they do not have that much left in the tank. It’s strange to see George Russell’s Williams right next to Ferrari in this chart, but that’s how the numbers are sometimes.

Here is the definitive answer to the question of why Ferrari couldn’t challenge for pole position today. While the Italian team had the pace to fight during the first and second sectors, they were completely out of place in sector 3. The final sector at the Yas Marina Circuit is highly dependent on aerodynamics and mechanical grip. This section of the track exposes Ferrari’s main weakness, their chassis.

Yes, their car is designed to be low on drag, but it lacks speed on slower circuits. Charles Leclerc was over 6 tenths away from Hamilton in the third sector, and over 5 tenths away from a struggling Max Verstappen.

Based on today’s data, Lewis Hamilton should be the heavy favourite to take tomorrow’s race victory. The Silver Arrows are not the fastest at the straights though, so they could be vulnerable to attacks at turn 8. Having said that, we know how hard it is to overtake at Abu Dhabi, so I do believe that Lewis has the best chance of winning tomorrow.