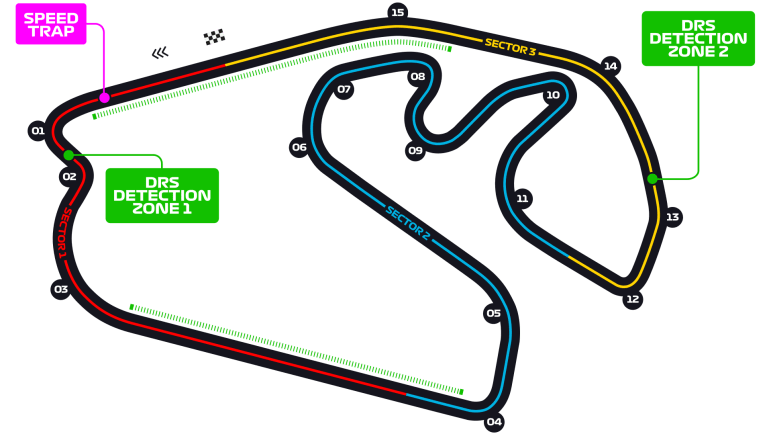 Max Verstappen took pole after a contested qualifying session at Interlagos. What happened with Ferarri’s straight speed advantage and Mercedes’ power? Let’s take a look at the numbers.

Taking a look at the maximum speeds recorded at the finish line and speed trap, we’ll see that the speed difference between teams wasn’t as big as it has been for the past few races.

At the speed trap, Ferrari lead the drivers wit ha top speed of 330.6 km/h. Six teams, however, were recorded as being less than 1 km/h slower than the Monegasque. Red Bull, a team that hasn’t been particularly fast of the straights, was just 0.4 km/h slower than the mighty Ferrari.

What about Mercedes? The Silver Arrows were the slowest team recorded at the speed trap. A higher downforce configuration is the most possible cause for this reduced straightline speed. Remember than higher downforce can lead to lower tire degradation during the race. Watch out for Lewis and Valtteri tomorrow.

At the finish line, Ferrari once again lead the charts. While hey were over 2 km/h faster than Mercedes, the speed differential isn’t as big as it was in tracks like Monza. With DRS, this speed advantage could be easily reversed during the race.

To begin, let’s remember that the intermediate speeds are measured at the end of sectors 1 and to respectively. Having said that, you may ask, why are Ferrari once again the fastest here? Weren’t they supposed to be slower during the middle sector?

The answer is yes, they were actually slower during the middle sector, but the maximum speed numbers are tricky. Take a look at Leclerc’s maximum speed of 331.3 km/h. Impressive isn’t it? It is measured, however, at the end of a DRS section, just before turn 4. What about the intermediate 2 speed? This one is taken, once again, after the fast turn 11.

Let’s take a look at the sector times, which are in my opinion, a much more meaningful representation of the speed of the drivers.

Now we get a much more accurate picture of why Max took pole position. In the fairly fast sector 1, Max was over a tenth faster than Lewis Hamilton, and just 8 thousands of a second slower than Charles Leclerc. In the twisty sector 2, Max showed his speed by taking an advantage of half a tenth over Lewis, and 7 hundredths over Charles Leclerc. Finally, in the fastest sector of the track, sector 3, Verstappen was just 2 hundredths of a second slower than Leclerc.

At the end of the day, the differences between teams were slim, and getting a lap together was the difference between pole and 5th place.

This is Max’s race to take. He was the fastest during the quali session. The car looks as good as it has ever looked. Ferrari’s speed advantage is marginal compared to recent races. If the Dutchman is able to avoid trouble in corner 1, and keeps his head down during the race, he has everything in his favour to take another race victory.

Let's take a look at the race simulation stints done by the teams during the FP2 session of the 2019 Brazilian GP.