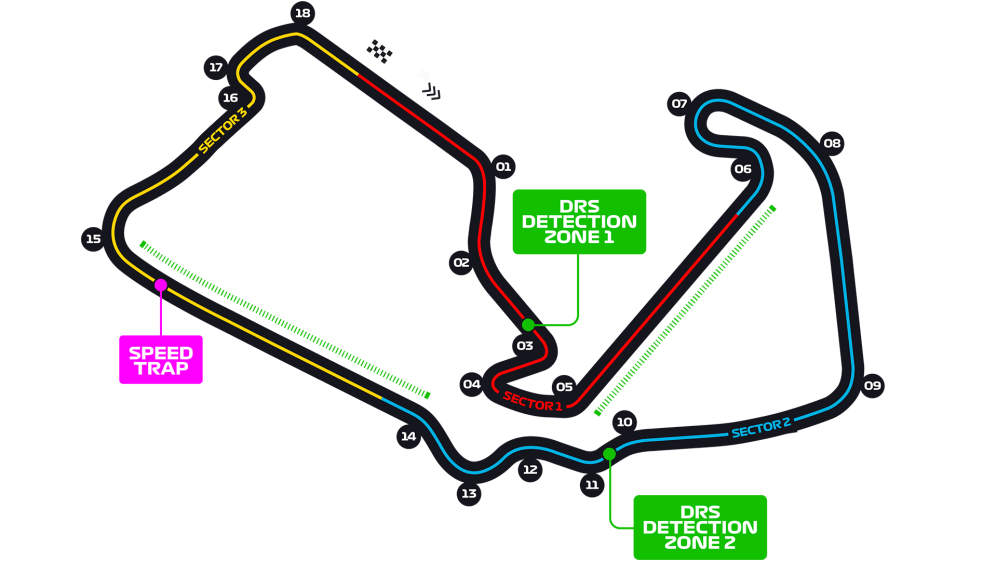 The 2020 British GP was unsurprising until the end. Lewis Hamilton and Valtteri Bottas were cruising towards victory until their tires blew up. Why where they so good during the entire weekend, and what can we expect from them in the next race? Let’s take a look at the numbers.


Silverstone is the second-fastest track of the year. A long track with mostly medium and high-speed corners, but with a few (but important) slow-speed corners that can make or break a lap.

Once again, Lewis took pole with Valtteri close to him. Why are they so dominant in every track, and where are they beating their rivals?

I decided to analyze the qualifying session corner by corner to see why the Mercedes was so dominant against the rest of the teams. To do this, I got the telemetry for all the drivers from the qualifying session of the 2020 British GP. I filtered the data to obtain only the fastest lap done by each driver in the qualifying session. Then I did a spatial analysis to get information about the average speed of each driver done in each corner, as well as in non-corner sections of the track. The corners that I have selected are “extended” meaning that they may include more corner entry and/or exit information than the ones seen at other analyses.

The next step was to categorize the corners into low, medium, or high speed turns. This is a fairly subjective process since there is no hard rule that says that turns with more than X km/h are slow or fast. In his case, I decided to categorize corners with an average speed of less than 200 km/h as slow-speed corners, while turns with a speed of more than 200 km/h but less than 280 km/ were classified as medium-speed corners. Turns taken with an average speed of more than 280 km/h were finally selected to be the high-speed corners of the track.

Yes, this is a different classification than the one done for the Hungarian GP. The idea is to classify the corners based on the track, not necessarily on the overall speed.

Finally, I created some charts that show visually the results that I obtained.

A couple of important notes here. First, the speed shown represents the speed over the whole corner, not just the speed at the apex. Second, this information is taken from the “telemetry” given by the Formula 1 Live Timing application. This is a HIGHLY experimental analysis. How accurate is the data that I’m analyzing? I’m not sure, to be honest. Take the results with a grain of salt ;).

Remember that you can cycle through the pictures if you click on the right or left arrows that are displayed on the image.

In T3, the ‘top’ teams took the fastest 6 places of the day, with Charles Leclerc being the fastest with an average speed of 143.04 km/h. Trailing by just 2 km/h, Valtteri Bottas is then followed by Lewis Hamilton and Alex Albon.

Drivers like Daniel Ricciardo, Kevin Magnussen and Romain Grosjean found speed in the 3rd slowest turn of the day, while the Racing Point drivers struggled to get the most out of the so-called “Pink Mercedes”.

In turn 4, the slowest corner of Silverstone, Max Verstappen showed the best attribute of the RB16. Max was the fastest driver of the day, taking the corner with an average speed of 118.15 km/h. His teammate, Alex Albon, wasn’t as successful in this corner, ranking among the midfield drivers, and being slower than Pierre Gasly and Grosjean.

Something similar happened with Charles Leclerc and Nico Hulkenberg. While Sebastian Vettel and Lance strong ranked in the top half of the field, Charles and Nico struggled, ranking in the bottom 5 positions in this section of the track.

In the second slowest corner of the track, we see a very interesting result. In what appears to be a wrongly created graphic (it isn’t!), the chart is dominated by teams that usually rank among the slowest of the field. Daniel Ricciardo took the turn with an average speed of 131.31 km/h, 5 km/ faster than the second-fastest driver in this corner. Kimi Raikkonen, Romain Grosjean, Kevin Magnussen and George Russell complete the top 5 drivers of the day. How were they so fast in this section, while drivers like Bottas or Norris struggled badly?

The answer may not be a surprise to you. As you can see on the map, T16 and T17 come one after the other. Being too fast in T16 can cost you speed in T17. This is exactly what happened during the qualifying session. All of the 5 fastest drivers in T16 now rank in the bottom half of the chart in T17. Grosjean and Kimi were actually the two slowest drivers in the penultimate corner of the track.

Drivers like Carlos Sainz, Bottas and Hamilton now rank among the fastest of the day. It certainly appears that sacrificing speed in T16 leads to strong gains in T17.

Turns 6 and 7 are taken sequentially and have a direct relationship with each other. A poor entrance in turn 6 could directly affect the speed taken in turn 7. Take turn 6 too fast, and perhaps turn 7 will be slower due to a poor corner exit.

The numbers show that Mercedes got this corner right. Lewis topped the charts in both T6 and 7, while Bottas took 3rd and 2nd place respectively. Ferrari and Racing Point seemed to be competent in this section of the track, both in turns 6 and 7, while teams like Haas struggled in T6 but excelled in T7.

Turn 5 takes great importance since it precedes the first DRS section of the field. Getting good traction out of this corner provides a massive advantage while taking the first long straight of the track.

We can see that most of the teams are fairly matched in this area, with only Bottas, Sainz and Vettel looking stronger than the rest of the pack. The difference between the 4th fastest driver—Lando Norris—and the 13th fastest—Daniil Kvyat—is of just 2.3 km/h. The only driver who failed to match the rest of the drivers in this section was Nicholas Latifi, who had an average speed of just 205.11 km/h.

The Scuderia and the Silver Arrows separated themselves from the rest of the field in this section of the track. Vettel, Hamilton, Bottas and Leclerc were separated by less than 1 km/h. The closest non-Mercedes or Ferrari driver to rank in the top-5 is Danny Ric with a mean speed of 275.28 km/h.

Alfa Romeo had a horrid time in T8, with the mean speed of both Kimi and Antonio Giovinazzi being an 8 km/h hour slower than the leaders of this turn.

We’ve reached the Maggotts, Becketts and Chapel area. One of the most iconic sequence of turns of the entire Formula 1 calendar. Needless to say that this section of the track can give a driver the edge towards pole, or destroy their entire lap.

Lewis Hamilton once again showed the upper hand, topping the charts in T12, T13, and ranking as the 3rd fastest driver in T14 and 2nd fastest in T15. With that sort of performance in the most technical section of the track, it’s hard not to take pole position.

People talk about the performance of Ferrari on the straights, but in Silverstone they lost most of the time in the corners. Neither Leclerc nor Vettel managed to extract the speed of the SF1000 in this twisty section of the track, with Vettel ranking among the 5 slowest drivers in all but turn 12.

Max Verstappen had a strong performance in these corners, ranking in the top 6 in all of them, but Alex Albon failed to impress in these 4 crucial corners.

McLaren driver Carlos Sainz deserves recognition in this area of the track. The Spaniard was among the fastest in all but T12. Great performance by the future Ferrari driver.

Complete domination by Mercedes in all high-speed corners. Hamilton topped the charts in T1 and came second in T2, while Bottas took 2nd and 1st place in the same corners. Ferrari didn’t do a bad job at all in these high-speed turns. Both Vettel and Leclerc ranked in the top 5 in both turns, showing that in Silverstone most of the time lost against the Mercedes drivers were in low and medium-speed corners.

We see the opposite trend with the other two Ferrari-powered teams, Haas and Alfa Romeo. In both T1 and T2, all of their four drivers struggled to make an impact and were as much as 10 km/h slower than the top drivers.

The same trend we saw in turns 1 and 2 continued in turns 9 to 11, with Mercedes having a complete chokehold on the rest of the field. Lewis ranked as the fastest, 3rd and 2nd fastest in turns 9, 10 and 11, while Bottas took 2nd, 1st and 1st place in the same corners.

While this may come as a surprise to some of you, the truth is that Ferrari performed admirably in all of the high-speed corners of Silverstone. Alfa Romeo had a similar performance in T9 to T11, with Haas being the ugly duckling and ranking once again as one of the slowest teams in this type of corner.

George Russell and Nicholas Latifi showed that Williams got something right this year. While neither of them was lightning-fast on any of the fastest corners of the track, they were usually among the middle of the field. Not a bad job for a team who was unable to even get close to Q2 last year.

Mercedes showed the same pace they showed a couple of weeks ago in Hungary. They are fast in all types of corners, and it looks like only a miraculous incident like a blown tire can stop them from taking the top positions this weekend. Wait a second…

Ferrari was horrendous at the Hungaroring, but they managed to perform much better in a high-speed track like Silverstone. The Scuderia drivers were at their best in the fastest corners of Silverstone. If it weren’t for the massive performance of Mercedes, they would’ve topped the charts and quali and perhaps during the race as well.

Red Bull wasn’t particularly impressive in quali-trim, but we know that they tend to perform much better during the race. With their current speed, it seems like the best idea is to perfect the setup for the race. Right now, it looks impossible for them to challenge for pole during the qualifying session.