2020 Styrian GP: Clues for the Hungaroring 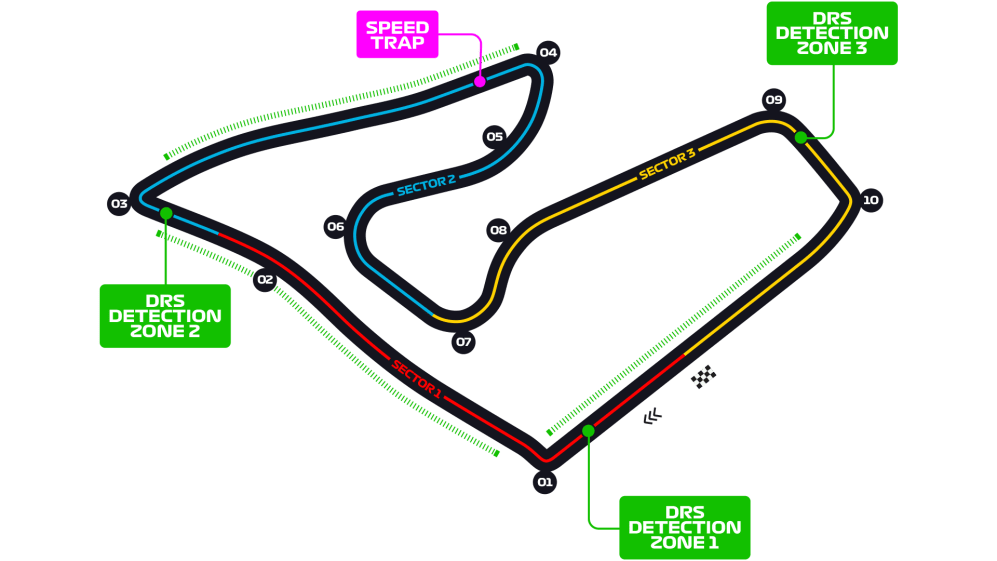 The 2020 Styrian GP is over and the 2020 Hungarian GP is just a few hours away. Can the Red Bull Ring give us some clues about how will the teams perform in one of the slowest tracks of the year? Let’s take a look at the numbers.

The Red Bull Ring is one of the fastest circuits of the calendar. The Hungaroring is, on the other hand, the slowest track of the year. I decided to analyze the two slowest corners of the Red Bull Ring, turns 3 and 4, in order to see how teams were doing in “slow” speed corners and see what can we expect from them in a track that has many of these turns.

I got the telemetry for all the drivers from the 2020 Styrian GP. I then did a spatial analysis to only select the data points that corresponded to turns 3 and 4. After getting this information, calculated the average speed done in each of these two corners for all of the drivers. Since I wanted to get representative performance, I removed outliers based on an interquartile range (IQR) method. The final results contain the average speed of 50% of the laps done by each driver in each corner.

Finally, I just created some nice charts for you to see. These charts have all the laps that were analyzed and contain the average speed of each driver in each corner. It’s important to note that the speed shown represents the speed over the whole corner, not just the speed at the apex.

Corner 3 is the slowest of the Red Bull Ring. If you could compare it to a turn from the Hungaroring, turn 1 would the most similar one. In this crucial corner, Red Bull showed its strength. Max Verstappen was the fastest driver in this section by far, with an average speed of almost 111 km/h. His teammate, Alex Albon, was more than a full kilometer per hour slower in the same turn. Mercedes is no slouch though. Both Lewis Hamilton and Valtteri Bottas performed admirably, with Lewis almost matching Albon’s speed.

Interestingly, the rest of the drivers were far off away from the two top teams of the grid. Daniel Ricciardo, the 5th fastest driver in this turn, was 1.46 km/h slower on average than Valtteri Bottas. The midfield drivers though were fairly even, with six drivers being separated by less than 1 km/h (Perez, Sainz, Kvyat, Raikonnen, Gasly, and Danny Ric).

The worst performers in this section were both Williams, Lance Stroll, Romain Grosjean, and Antonio Giovinazzi. While the FW43 is not a world-beater, it’s unexpected to see it being so slow, especially in the hands of a capable driver such as George Russell. Lance Stroll struggled in this sector, even with one of the current fastest cars of the grid. This number may give you some insight into why he had a hard time overtaking Danny Ric in one of the two best overtaking areas of the track.

Corner 3 is the second slowest of the Red Bull Ring. It’s hard to compare it to any corner of the Hungaroring, but perhaps you could once again compare it to turn 1 or even turn 2.

In this turn, Max Verstappen was once again the fastest driver of the day. His average speed of 174.62 kilometers per hour was slightly faster than Hamilton’s, but miles ahead of the rest of the field. As you can see, neither Albon nor Bottas were able to challenge their teammates in perhaps the most exciting corner of the Red Bull Ring.

The trend seen in corner 3 was once again seen in corner 4. Daniil Kvyat from AlphaTauri and Daniel Ricciardo from Renault showed a strong performance in this area, with both McLaren drivers slightly behind.

On the other side of the spectrum, George Russell was once again the slowest driver of the day. Haas seemed to struggle too in this slow to medium speed corner, with Lance Stroll also failing to impress.

Can we take something from this analysis? Perhaps. We all know that Red Bull gets stronger in slow-speed circuits that are more aero and chassis dependent. While the Austrian team was unable to challenge the Silver Arrows less than a week ago, they were still more than up to the task in turns 3 and 4. If the RB16 performs in the twisty Hungaroring as it did in these two previously analyzed corners, we may see a nice battle for pole on Saturday and the race on Sunday.

Regarding the rest of the teams, the midfield battle is as good as it has ever been. Renault looks stronger than last year and will be looking to challenge McLaren and Racing Point. Williams and Haas however look to be in trouble once again, with both of them struggling in slow-speed corners. Haas continues to have brake issues, as they have had for the last 2 years by now, while Williams was unable to get a proper race setup for both of their drivers.

In any case, I hope that you have enjoyed this article. If you did, please share it with your friends and let me know what you think in the comments below.

Let's take a look at the race pace of the 8 slowest drivers of the 2020 Styrian GP.